IF YOU TRULY LOVE ELEPHANTS, YOU'LL
NEVER RIDE ONE. HERE'S WHY.

TAKE ACTION: SIGN THE PETITION
OR
MAKE A DONATION

If you love elephants, please don’t ride them! Elephants used for riding suffer extreme abuse throughout their lives. They’re poached from the wild as babies, then isolated from other elephants and beaten until they’re so terrified of people they’ll do anything. This cruel practice even has a name: phajaan, or “breaking of the spirit.”  Then, spirits broken, they are beaten, overworked, and seen only as money makers. We are committed to eradicating this abusive industry!

Elephants in Jaipur: The Statistics

From the 2018 Animal Welfare Board of India Report on Evaluation of Applications for Registration of Captive Elephants for Performance in Jaipur.

Read the AWBI Report Here
YOU CAN MAKE A DIFFERENCE - SIGN NOW!

What Can We Do?

We are petitioning governmental authorities to do all they can to help put an end to the abuse of elephants used for riding in Jaipur. Much of what takes place in the elephant-riding industry is illegal by Indian law. Help us put a stop to this!
SIGN THE PETITION 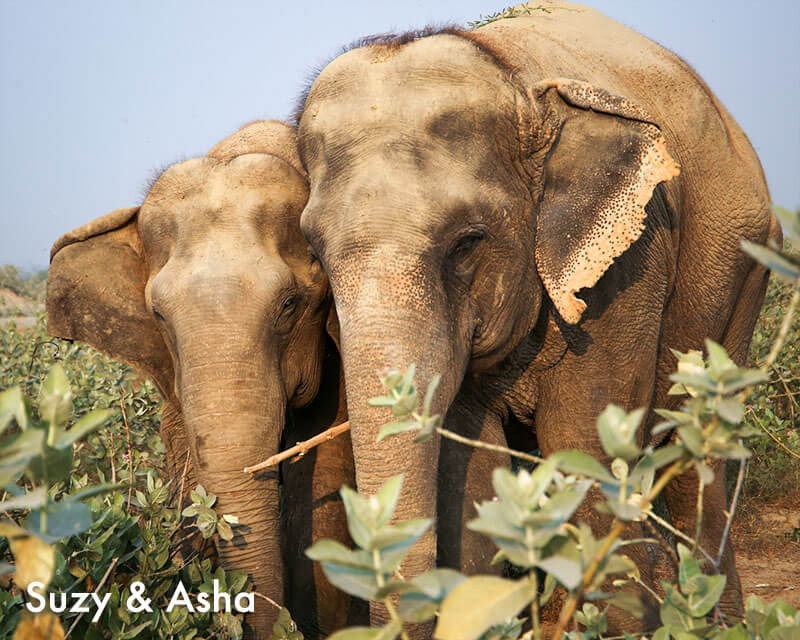 Asha is the Hindi word for “hope.” It’s also the name of a very special elephant who lives at our sanctuary in Mathura.

Asha was worked hard for years in Jaipur—a city with some of the hottest and driest weather in all of India—hauling heavy loads through the stone streets and up the steep hill to the Amer Fort, where some elephants have fallen to their deaths. When she came to our sanctuary in 2015,  her body was pockmarked with abscesses from sleeping on paved roads. She was unable to walk properly because of joint damage in her legs, and her feet were deeply cracked. Holes had been dug into her ear folds dug the sharp implements “trainers” use to force elephants to obey. There were fresh wounds on her face from her owner’s bull-hook.

But something remarkable happened. For the first time in her life, Asha had access to good food, clean water, veterinary care, and green space, and the healing began in earnest.  She quickly found a small family of other elephants—Peanut, Suzy, and Coco among them—and they adopted her as their matriarch.

And that is her story. This downtrodden elephant, beaten and abused for decades, blossomed into the heart and soul of our rescue center. The wounds from her past are deep, and they will take time to heal if they can heal at all. But Asha’s life shows us that with compassion and love, even the most battered of elephants can find the beautiful, sensitive spirit that was always inside. Asha, your name truly does mean hope.

When booking your travel, be skeptical even when places advertise themselves as an “ecotour” or as “humane.” If they advocate for the riding of elephants, painting/decorating them, or if they keep any elephants in chains, they should be avoided.

To experience elephants in a humane way, please visit Wildlife SOS Elephant Care and Conservation Center in Agra to meet our rescued elephants. 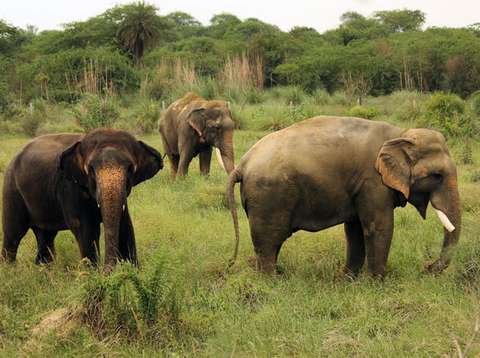 I know people who have ridden elephants and said it was an amazing experience. What’s so terrible about it?

I know people who have ridden elephants for fun and said it was an amazing experience. What’s so terrible about it?:

It may be your dream to ride an elephant, but it is an elephant’s worst nightmare to be ridden. Here’s what goes into making an elephant “rideable”

First, an elephant calf is captured from the wild, tearing it away from its mother and herd — as well as from any chance it has of a free, wild life. This is illegal and can be termed as “poaching.”

The calf is restrained in a small squeeze contraption called a kraal and starved and beaten for months. This brutal “breaking-in process” called katti azhikal or phajaan, is intended to destroy the calf’s natural, willful spirit and to instill so much fear in the young calf that it will allow humans to ride it for fear of suffering the same pain again.

The elephant then spends the rest of its life living in constant fear- beaten frequently and regularly to reinforce the “training”. Furthermore, the elephant then is kept in isolation for all its life with no or little interaction with other elephants. This is psychologically detrimental for the elephant, causing it to become withdrawn and unhappy, and in turn engaging in stereotypic behavior.

Once in captivity, these elephants are often neglected and poorly cared for. They receive little or no veterinary care; their nutrition is compromised and they have restricted access to water. These captive elephants are housed on concrete floors, where they are chained for extended periods of time, often standing in their own dung and urine. This leads to foot rot and many diseases.

The very act of riding is cruel — an elephant’s back was not designed to carry weight and yet the weight of the carrier, the mahout/keeper and the tourists on its back can put an intense amount of pressure on the animal’s spine. These weights can often exceed 200-400 kilograms of the howdah and in addition to it the weight of the mahout and three adult passengers easily exceeds 600 kilograms—causing sores bruises, cuts and deformities in the animal’s back, but most importantly it leads to early arthritis and severe joint pains.
Illegality persists in the elephant riding industry despite strict laws, with owners unashamedly flouting rules and lacking requisite ownership paperwork — taking advantage of the difficulty of enforcement to break all welfare and conservation laws.

Where do these elephants come from?

How are these elephants trained?

The indoctrination process of a captive elephant is extremely brutal. The animal is caged, or tightly restrained for weeks while people beat it and force it to obey commands — a process known as phajaan (or breaking of the spirit). The objective is to destroy any wild spirit within the elephant, to drive fear into it to the extent that it is too terrified to ever retaliate to make it possible for anyone to ride the elephant, it has to be broken.

Why is it wrong to take away an elephant from its mother?

The maternal bond between an elephant calf and its mother is very strong, and very well documented. An elephant mother fiercely protects her calf and teaches it the social and life skills needed for survival. In the wild, a calf will learn to engage in complex social behavior and problem solving, traits that will enrich him or her mentally. However, in captivity, calves are deprived of this critical bond — and of their chance to learn these important life skills.

Elephants are an endangered species. India, with nearly 60% of the world’s few remaining wild Asian elephants, is the last stronghold of this incredible species in the wild. But their wild numbers still look bleak at merely 22,000 to 27,000 elephants. At this rate of loss, India could lose the entire wild elephant population in the next 5 to 10 years if steps are not taken to conserve and protect them. To lose the few remaining wild elephants to simply abuse them to fuel the tourism industry is not only extremely irresponsible, but it could also spell doom for the entire species.

How are these elephants trained to give rides to tourists?

The indoctrination process of a captive elephant is extremely cruel. The animal is tightly restrained for months while people beat it and force it to obey commands — as we said, it’s a process they even named: phajaan, or breaking of the spirit. The objective of this process is to simply destroy the elephant’s independent spirit and instill fear to such a degree that the elephant is too terrified to ever disobey or retaliate.

Does any elephant enjoy giving rides?

No. Besides the physical and mental abuse that an elephant faces to become rideable, the very act of riding with a howdah and passengers is also physically torturous to the elephant. It may seem innocuous considering the large size of an elephant, but the protruding spine of the elephant is often forced to bear the entire weight of the howdah, the mahout and the tourists, resulting in excessive pressure on the spine, which leads to deformities, wounds and permanent disabilities. These elephants often develop burns, sores and wounds from the ropes that tie the carrier on, and the weight can result in them losing balance and breaking their legs — a broken leg is generally untreatable in an elephant causing permanent disability, early arthritis and painful joints or even death. The surface and inclination on which the elephant is made to walk can also lead to the wearing off of their sensitive footpads, especially if the path is rocky, tarred and prone to overheating, and if it is a hilly or an uneven terrain.

Is it legal to use elephants for rides? Are there any laws or guidelines in place to protect elephants used for rides?

There are several guidelines and laws to help ensure the welfare of elephants, but these are ignored and violated by greedy owners and handlers:

In order to use an elephant for rides, the owner must have an Ownership Certificate issued by the Forest Department, with all the details of the elephants’ name, sex, place of origin, microchip etc. and can only have been issued during the stipulated periods after the enactment of the Wildlife Protection Act, 1972 or the guidelines issued by Project Elephant. Different states in India have different rules for using elephants for rides — for example, elephants giving rides in Kerala are required to hold a performing animal permit from the Animal Welfare Board of India, while in Rajasthan, the use of the bull-hook and the use of bull elephants for rides is prohibited.

Project Elephant has stipulated guidelines on the working and housing conditions necessary for the maintenance and upkeep of an elephant in captivity, including those that give rides, but these are never enforced nor is there mechanism in place for regular inspection unless a formal complaint is lodged.
Unfortunately, it is still legal to use an elephant for rides, if the owner has proper documents in place and adheres to the stipulated guidelines.

How do I know that the place I am visiting treats its elephants well?

Any facility that offers rides to tourists is abusing the elephants to keep them controllable while it is being ridden or painted over by humans. Instead look for shelters that house rescued animals, that do not offer rides to tourists, and in fact work towards sensitizing public about issues related to wildlife conservation and welfare or Sanctuaries and National Parks where you can see wild elephants.

That said, however, beware because many private and abusive elephant tourist spots will claim to be sanctuaries/rescue centers. They make false claims that their elephants are rescued, when in fact they are merely purchased and further exploited for tourist entertainment and other exploitation such as parades and temple ceremonies.